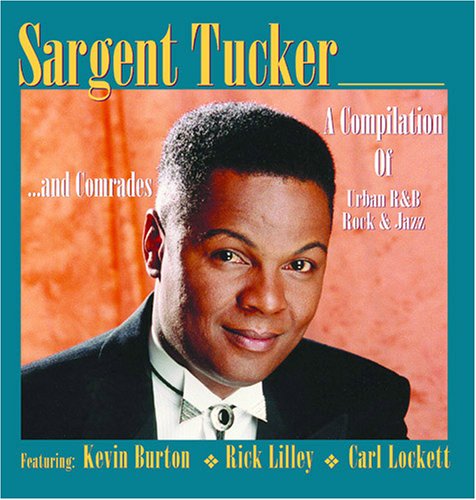 Sargent Tucker and Comrades Compilation Album is clean "grassroots" American music, making it very unique when compared with today’s music. This Album covers several different genres of music, as it combines traditional Urban Ramp;B, Rock, and modern Jazz. The music is funky, smooth, and provocative, this album rocks! A variety of compositions are provided for a musically diverse listening audience, blending various styles. The Artist performing on this Album: Sargent Tucker, Rick Lilley, Kevin Burton, and Carl Lockett each have recorded and performed with many of today's great artists. This Album is a collective effort from artist, who decided to produce their own product challenging traditional thinking while providing good, clean, music for the public to hear.

"Its a really laid back slab of jazzy soul, ... he's got soul and this is one infectious song." -- Waxing Lyrical, comments on

A reviewer, comments on an original from the Compilation CD Album, "Tucker has a really catchy "I Need Your Love." -- Vibe Magazine, England

Our music has a clean (San Francisco Bay Area) sound that appeals to a wide-range adult audience. Live performances are on target as the group displays its diverse musical talent, playing grass roots, Rock/Blues, Urban Ramp;B, Motown Classics, and other popular dance music, including original compositions.

Biography Johnnie Tucker Johnnie Tucker, outstanding vocalist and founder of the group Sargent, applies his multi-faceted musical talent to bring together a sound that both soothes and moves. Having shared the stage with The Ohio Players, The Miracles, and Earth, Wind, and Fire, singer/songwriter Tucker also brings the silky rhythm of the bass guitar to his original compositions. His single “Come See Me” was chosen for the compilation album “Sun Set Strip”, produced by Dr Dre and the World Class Wrecking Cru. Rick Lilley Veteran guitarist Rick Lilley plays professionally, lighting up the stage with impressive guitar licks and soul-driven compositions. Rick has recorded from London to the U.S. with fellow musician Jim Funk from The Union, and has shared the stage with famed Santana percussionist Mingo Lewis. Developing his talent by way of the blues, Rick sings the songs he composed and plays them with a new slant on the true rock sound. Kevin Burton Kevin Burton began playing keyboards, later touring the U.S. with Freddie King, and with Leon Russell. Several years later he wrote the song “Cool Joe” which was recorded by the famed George Clinton and included on the Capital Records recording “Do Fries Come with that Shake”. Not long after joining Frankie Beverly amp; Maze, Kevin was featured soloist on their Certified Gold album “Joy amp; Pain” with over 500,000 records sold. Carl Lockett Versatile musician Carl Lockett has recorded and performed with a wide variety of legendary musical talent, including The Whispers, Chuck Mangione, and David Crosby to name a few. His guitar styles range from the smooth sounds of Wes Montgomery to the gut-driven depth of a Jimi Hendrix solo. Carl has appeared on The Tonight Show, and can be heard on the soundtracks to “Peggy Sue Got Married”, “Cannonball Run”, and “Twilight Zone”.