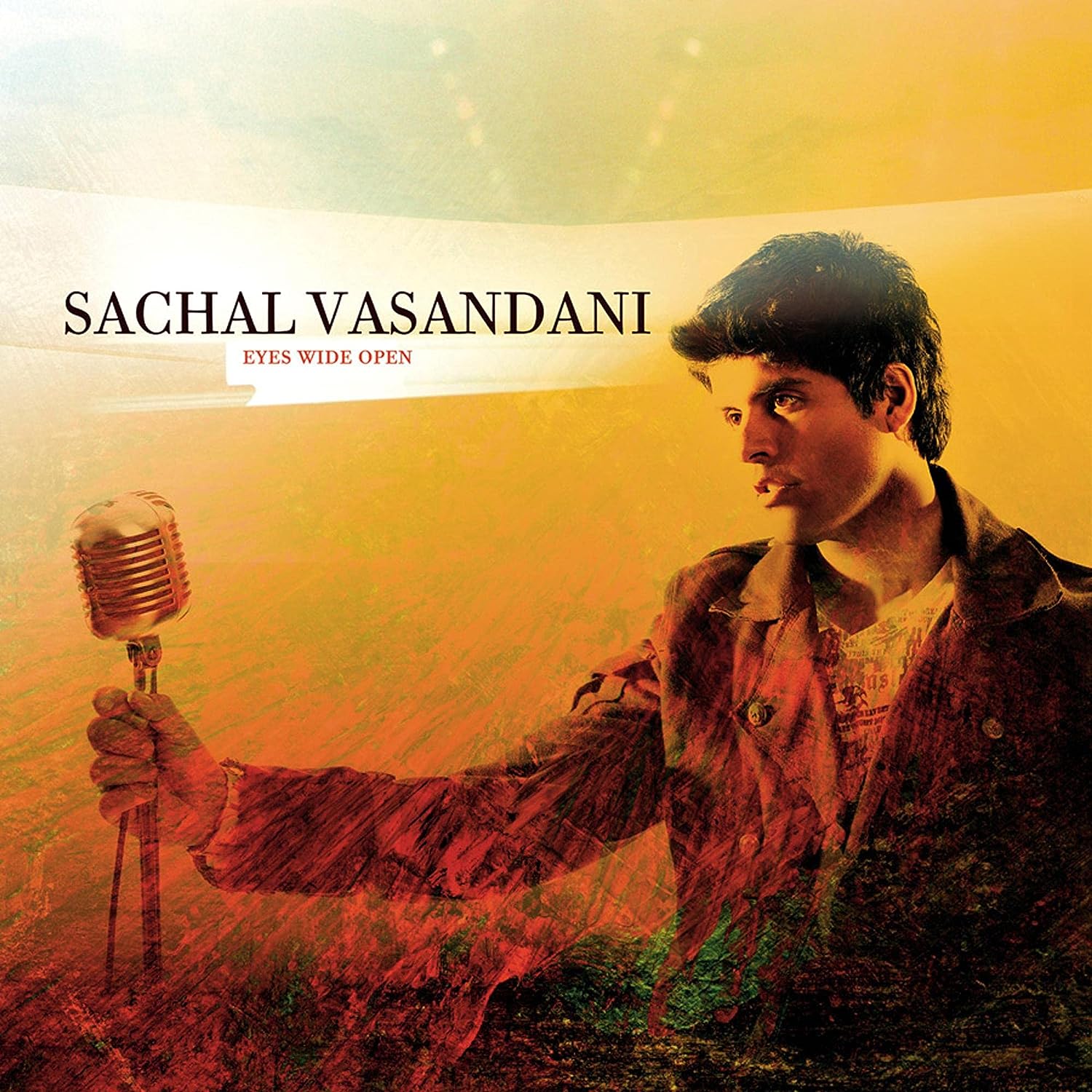 His eyes may be wide open, but handsome 28-year-old newcomer Sachal Vanandani strives for a sleepy-sexy allure with his dark, cushy vocals and seeming inability to break a sweat. If you're waiting for a male Norah Jones to come along, this pop-inflected Indian-American artist may come as close as you're going to get. He too, has a healthy appetite for generic sampling, mixing a Percy Mayfield blues, a Jobim bossa, a Sade confection, a Billy Strayhorn "Flower is a Lovesome Thing," and his own searching ballads. But Vanandani, whose urbane sophistication and Chicago roots link him to Kurt Elling, is a truer jazz artist than Jones, comfortably bonding with a swinging trio headed by pianist Jeb Patton (a young veteran of the Heath Brothers) and guest players including vibraphonist Stefon Harris and trumpeter Marcus Printup. He can scat, too, without overplaying that gambit. Eyes Wide Open, his third album following two self-released titles, gets a bit staid at times, but it exudes promise. --Lloyd Sachs

"...a superb debut of distinctive originals and intelligent makeovers that teem with a fresh vitality..." -- BILLBOARD

One of the most startling artistic revelations of 2007 is New York-based vocalist-songwriter-bandleader Sachal Vasandani, who makes his Mack Avenue Records debut with the exceptional CD, Eyes Wide Open. Indeed, the title says it all: This 12-song collection of stirring originals and smart covers is an eye-opener to a fresh, young talent who displays a singular, deep-brewed voice and possesses an uncanny sensibility to straddle the fine line between jazz and pop. Vasandani is in the company of his established trio (performing together since 2001) comprised of pianist Jeb Patton, bassist David Wong and drummer Quincy Davis. Guests on the CD include vibraphonist Stefon Harris, trumpeter Marcus Printup and guitarist Doug Wamble. The album is produced by esteemed bassist-bandleader John Clayton and veteran staff producer Al Pryor, engineered by Joe Ferla and mastered by Bob Ludwig.

In an era where young male singers believe that trying to channel Frank Sinatra is the play-it-safe road to success, Vasandani instead strikes a chord as an original that evokes integrity as a songwriter and song stylist. As a result, there's a rare depth of emotion to the lyrics in many of these songs. "With the tunes I wrote and the songs I cover, I wanted to share feelings of both hope and loss," says Vasandani, who was a semi-finalist in the 2004 Thelonious Monk Institute Competition. "Songs often express sentiments in black-and-white; I wanted to get to a `gray' area of mixed emotions. Overall, I believe the album has a positive outlook, but acknowledges the struggle you go through to stay positive. That's the binding glue."

Vasandani contributes three fine originals to Eyes Wide Open. His tune of sweet escapism, "Storybook Fiction" (for which Clayton "hammered out a bridge in the studio"), is, he says, "a song about a fictitious love that was borne out of living in crowded New York. You can almost see into a neighboring apartment, and the story begins there. It's a song that imagines and hopes for a perfect love." Originally conceived as a weighty ballad, for the album Vasandani re-imagined it in an uplifting light. "I wanted to give it an additional positive energy."

Written with a driving rhythm and featuring a brilliant vibes solo by Harris, "Send `Em Up to Heaven" was partially inspired by the events of September 11. "It's a song about struggling to forgive," says Vasandani. "I thought Stefon's voice on it would really solidify the vibe." "Please Mr. Ogilvy" is a straight-talking number about an artist's desire to be supported, or as Vasandani sings, the need "just to be endorsed by you." He explains: "It's based on my realization that people with vision still need advocates to help them realize their goals. I've found that this song resonates with so many artists and people trying to do their own thing. We all need that advocacy, that endorsement."

In addition to his own songs, Vasandani covers tunes performed by neo-soul songstress Sade (the quiet, lilting "It's Only Love That Gets You Through"), alt-folk band Iron amp; Wine (the gently swinging "Naked As We Came"), pop-blues great Percy Mayfield (a rarely covered gem, "Strange Things Happen," which Vasandani says is "a fun way to say, `watch out'"), Brazil's iconic songwriter Antonio Carlos Jobim (the upbeat bossa-driven "I Was Just One More For You" with Wamble tearing up the proceedings with his guitar prowess), and Duke Ellington's composer Billy Strayhorn (an unabashed swinging take on "A Flower is a Lovesome Thing"). Several of the songs on the album pair darker lyrics with sunnier musical dispositions. "Ella Fitzgerald taught me how effective a song can be when a serious issue is presented in a bright setting. In that way, you can layer your emotions. On one layer it could be an upbeat tempo; on another, it's about one's heart being broken." On Eyes Wide Open, Vasandani includes two standards that have been part of his repertoire since he was 18: "I Can't Give You Anything But Love" (delivered uptempo with a fine scat interlude) and "September in the Rain" (with a relaxed feel).

One of Vasandani's major influences, Shirley Horn, figures prominently on two songs. The first, "I Could Have Told You," is a song that Vasandani "really connected with the lyrics. It's about the pride that follows heartbreak. Marcus expresses this so well through the trumpet." The other is "You Won't Forget Me" where Vasandani pays tribute to Horn. "I try to emulate the way Shirley sang it," he says. "John, Stefon and the band added some special touches, but the vibe is all Shirley: slow, haunting and eerie with the pulse stripped down to the ride cymbal."

Vasandani was born in Chicago and grew up in a household where all kinds of music was appreciated, from western and Indian classical to the pop of the day including Michael Jackson and the Beatles. His parents also listened to jazz--from Ellington to Keith Jarrett--which piqued Vasandani's curiosity about the music. At the University of Michigan, in addition to majoring in economics, he earned degrees in jazz and classical music. He was named Collegiate Jazz Vocalist of the year by DownBeat in 1999, after which he moved to New York to pursue a career as a singer.

While he first took a job as an investment banker on Wall Street, essentially subsidizing his passion, Vasandani later quit to devote himself to music full time, hustling gigs at such venues as Cleopatra's Needle and later the Zinc Bar. One of his big breaks came when he had the opportunity to display his talent at the Monk Competition; another break was being enlisted by the Lincoln Center Jazz Orchestra in 2005 to perform trombonist Ron Westray's "Chivalrous Misdemeanors," which was jazz inspired by the fictional character Don Quixote, at Rose Theater.

"There wasn't any one turning point," says Vasandani, who was signed to Mack Avenue Records in 2006. "It was a process with a lot more refining than defining moments."

As for his home base in New York, Vasandani says it's the perfect place for him to be. "I'm connected to a bit of the jazz scene, but there's also such a cross-pollination of different kinds of music here. I'm looking forward to expanding my reach--to establish myself and my voice as well as explore all the different scenes here. There are so many fantastic elements of New York that I want to put through my own filter."

My Cart
You bring the imagination. We bring the craftsmanship.

DESIGN YOURS
Our Men's Oxford Shoes, the cornerstone of every shoe collection.

ORDER NOW
Our Men's Dress Sneakers, the heritage of a classic shoe coupled with the audacity of a sneaker.

A traditional way of crafting, a contemporary way of purchasing

The word is out

Since launching in 2015, Undandy has made its mark as a leader in customisable, handcrafted men's dress shoes.
The genius of the Undandy website is that it allows you to design exactly the shoes you want (...) Every element of the shoe can be customised, including colours and fabrics and the opportunity to add a personalised engraving.
Portuguese shoe brand Undandy is combining the country's shoemaking heritage with the last digital technology.
I've tried other custom clothing e-tailors but Undandy's technology so far beats them all. Think of Undandy as custom shoes for everyday. Build them online but wear them anywhere. Until something better comes along. I can't imagine buying a pair off the rack again.
Get in touch
May we be of assistance? There is nothing that we love more than helping our customers find their sole mate. Whether it's fit, function or just to get better acquainted with Undandy, we're here to help.
Email
We're delighted to converse over emails. You shall be responded to within 24 hours, and a gentleman never breaks a promise.
customercare@undandy.com